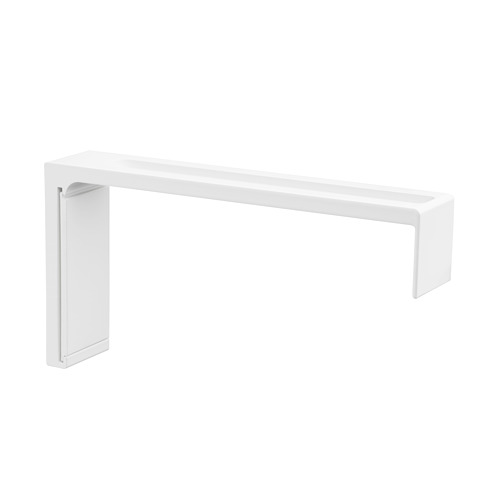 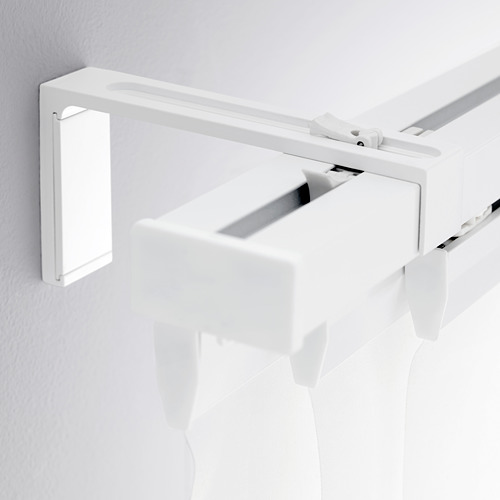 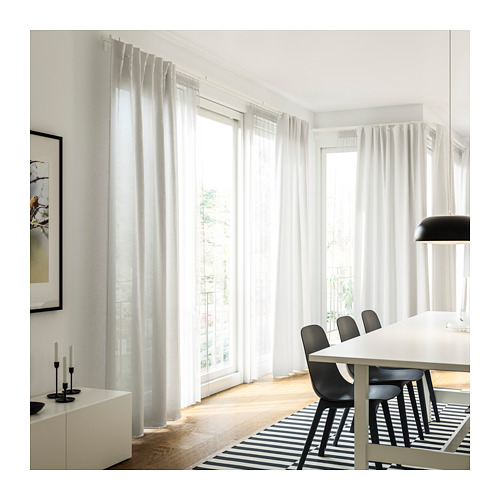 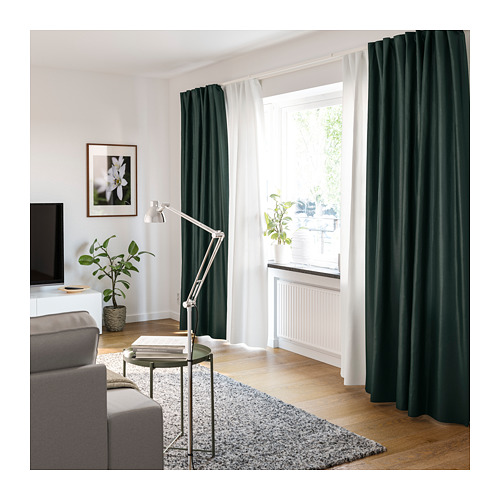 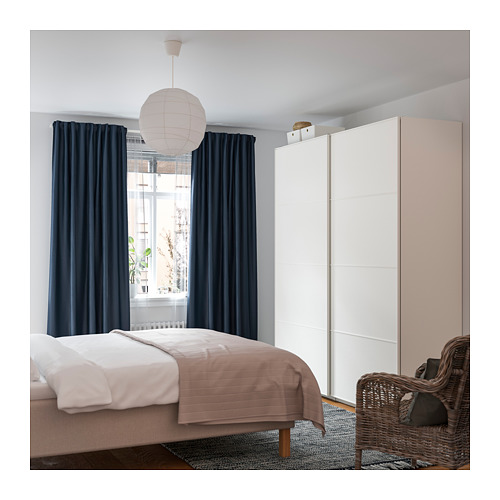 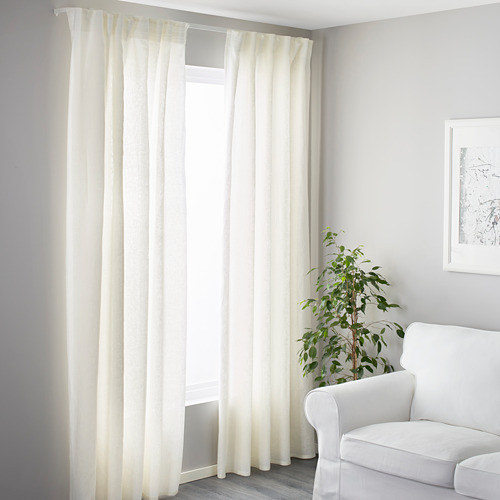 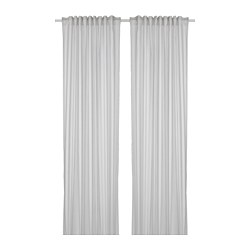 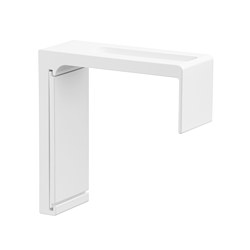 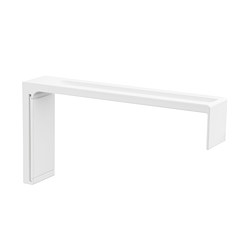 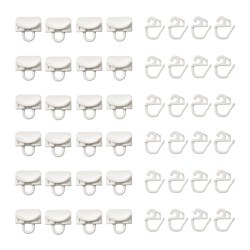 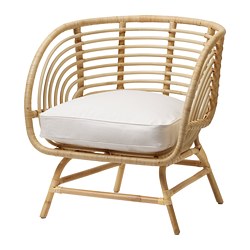 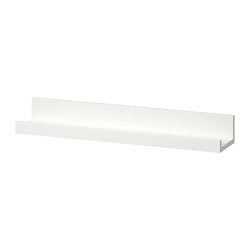 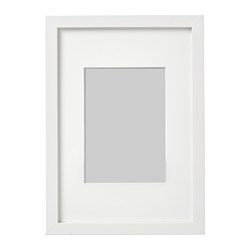 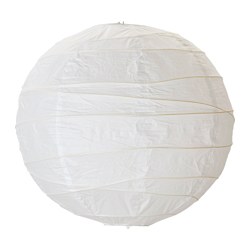 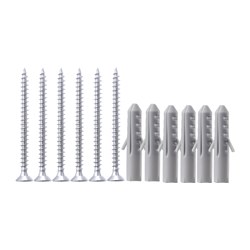 Use VIDGA planner to create a customizable curtain railing system according to the needs and shape of your home.

The long wall fitting is perfect for solutions with several parallel rails.

This slightly longer wall fitting allows you to have several parallel rails for curtains in layers. Perfect if you want a more changeable solution and want to adjust how much light filters through.

Wipe clean with a damp cloth.

Screws are not included.

Say goodbye to complicated assembly and hello to VIDGA!

VIDGA curtain hanging system gives you lots of possibilities to hang curtains. Hang them in front of windows and niches, or use them as room dividers, sliding doors or around a bed. If you hang curtains in layers you can not only combine colours, patterns and materials in your own personal way, but also dampen sound, adjust light and control temperature in the room more effectively. You can connect several rails together to create one long rail, or shorten them to the desired length with a hacksaw. Mount the rail to walls or ceilings using VIDGA wall or ceiling fittings or use VIDGA corner pieces to mount rails around corners.

We think it should be easy to hang up curtains by your windows. With the help of ideas from customers, we've developed a smart solution. We were inspired by belt buckles and the result is VIDGA curtain hanging system. Simple instructions to follow and easy to set up with just a few tools. All that’s needed is an Allen key and a few clicks. It couldn't be easier.

Over the years, we've learned that assembling curtain rails can be complicated. To make a better solution, we started by researching why customers returned the rails. We got the idea for the easy click-together of VIDGA curtain rails from objects like buckles and sports equipment. Because every part is designed from scratch, we could even bring in robots to produce them! But you won't need to call in a high-tech robot for assembly. You'll just need a simple allen key.

After iron, aluminium is the world's most used metal and has a very wide range of uses. It’s easy to shape and lightweight, but is still strong and durable. In our range we use it for things like kitchen utensils, curtain rods and tealight cups. A big advantage with aluminium is that it can be recycled again and again without losing its quality. Recycling consumes only a fraction of the energy required to produce aluminium from new raw materials.

At IKEA, we want to create innovative solutions for a better everyday life that's easier, too. Take curtain rails, for example. Over the years, we've learned from customers that our curtain rails are good quality but assembling them can be complicated and take hours. In challenging ourselves to make a better solution, we never expected robots would be involved.

Product development engineer Martin Bo Zhang has worked with curtain rails for more than a decade. He uses lots of gestures and body movements when he talks. Martin lifts both arms over his head like a ballerina. He's showing how hard it can be to keep a curtain rail in place while assembling it at the same time."There are 30-50 small screws," Martin says. He brings his thumb and forefinger together, leaving space for a grain of rice. "This small." He keeps one arm up and reaches toward the floor with his other arm. "If a screw falls on the floor, you can't find it," he explains, "and good luck if you have a high pile rug." So how did Martin, designer David Wahl and a team of many at IKEA figure out how to improve curtain rails? First, they researched what customers and co-workers said about curtain rails that had been returned. They had workshops with lots of IKEA colleagues, too. Then they started looking at anything and everything but curtains.

A concept that clicked

Buckles, belts and sports equipment—that's where David and the team got some unexpected ideas for VIDGA curtain rails. "By looking at solutions from different fields of products, you can get inspired to find new ways of solving problems," he explains. That's how the team came up with the concept for VIDGA to click together using as few tools as possible. And there aren't any rice-sized screws to lose. "You still put it together yourself," Martin says, lifting an arm into the air like he's holding a curtain rail against a wall. "But you don't need to spend an hour and a half with your arm like this." So now you know how customers and clicks helped improve curtain rails. That just leaves the robots.

Bring in the robots

Where are the robots, exactly? About an hour north of the IKEA home base in a town called Åseda with a population of roughly 2,500. A supplier there won the worldwide bid to produce VIDGA curtain rails, built a new factory and hired more than two dozen new employees. "Going from talking about the small things to being in the factory, looking at the conveyors going around the robots continuously working, is a mind-blowing experience," Martin says.

The team was able to automate production with the robots because they designed every piece of VIDGA from scratch. In fact, since nothing like VIDGA exists on the market, we're applying for a global patent for the whole system—a rare step for IKEA. Will you need to call in a high-tech robot to assemble VIDGA curtain rails for you? Nope. You'll just need a simple allen key. Sometimes a better everyday life starts with a click.