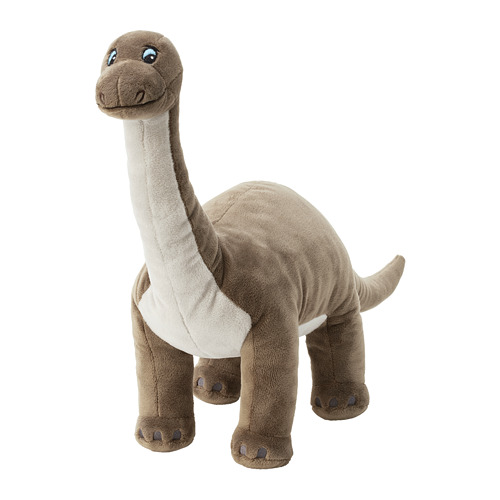 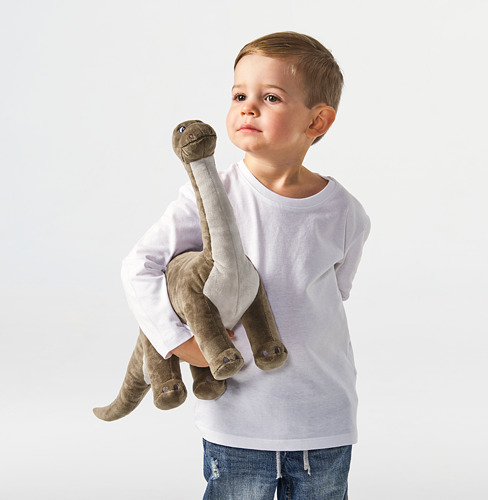 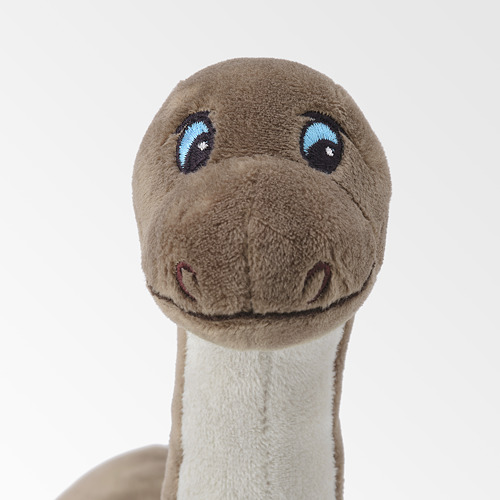 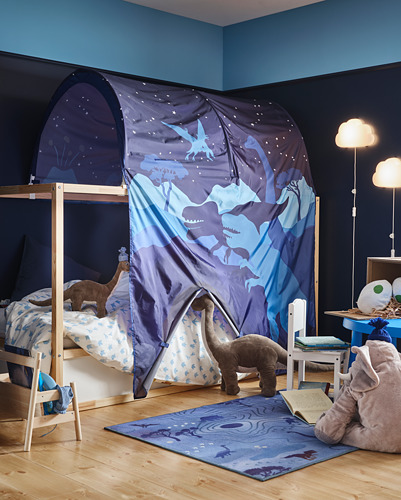 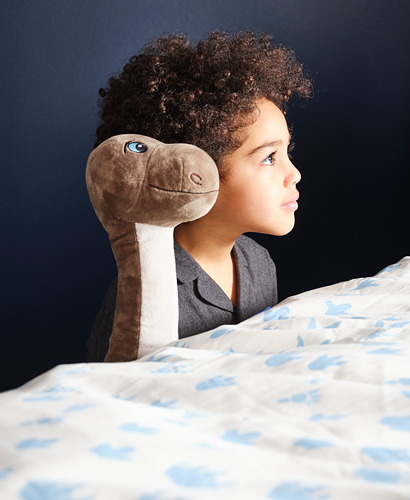 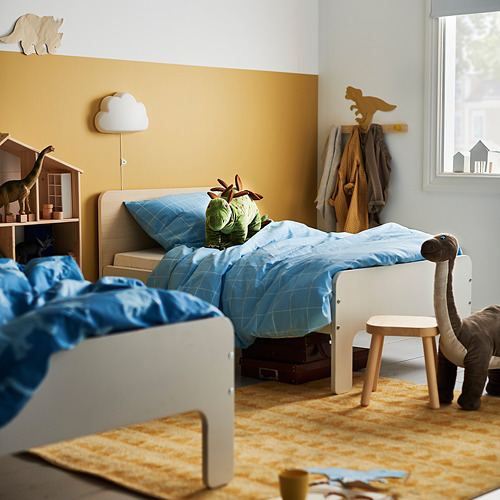 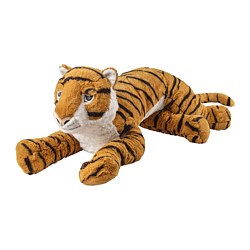 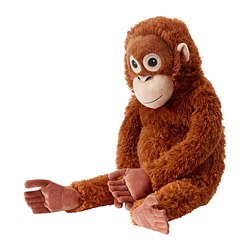 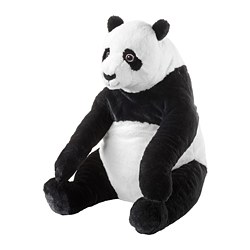 The Brontosaurus is easy to recognise with its long neck and small head. It’s also called "Thunder lizard" since the ground rumbled as it walked. No wonder – it was 22 metres tall and weighed 15 tonnes!

This dinosaur is also available in a larger size. It can feel safe to hold hands with someone bigger when you’re little.

Imagine having a dinosaur friend. The JÄTTELIK collection has 11 soft versions of these exciting prehistoric animals – and one egg! And all just as cuddly and adventurous. Which is your favourite?

All soft toys are good at hugging, comforting and listening and are fond of play and mischief. In addition, they are reliable and tested for safety.

Recommended for ages from 12 months.

Sure, they’re cute but are they safe? Absolutely!

You can rest assured knowing that all our children’s products live up to the highest health and safety standards. We put our toys to the test – up against the toughest in the world (much tougher than any two-year-old). All so you can worry less and they can play more.

Why do children love dinosaurs?

While working on JÄTTELIK we found several possible answers to why many children are so fascinated by dinosaurs. One is that these creatures with long names blur the line between reality and fantasy, giving the child a tingling sensation of curiosity and excitement. There is also something thrilling about collecting and categorising facts about them. With this special knowledge, the child can gain a first sense of truly mastering something (and knowing more than you). 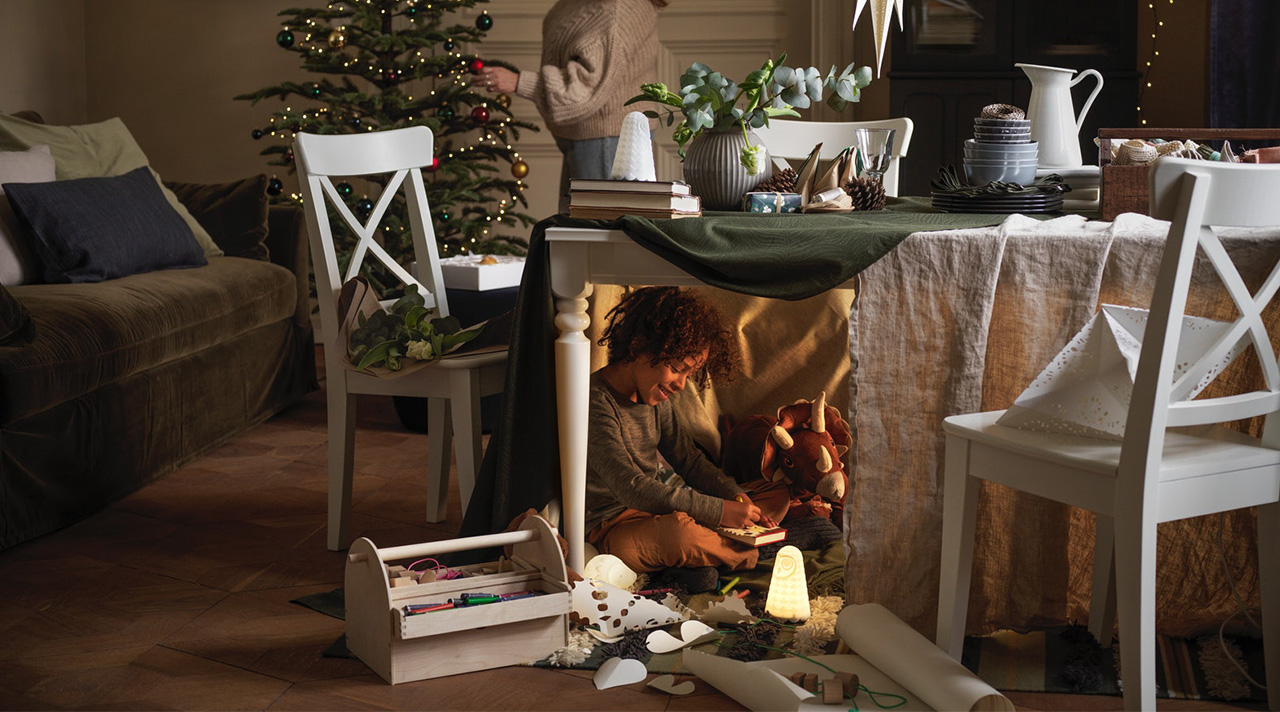 We wish you a homey Christmas!

The winter holiday this year will be a little different, but so what? Staying at home means you can invest all time you would have spent visiting others in pampering yourself and the ones that are right next to you.

Why do children love dinosaurs?

JÄTTELIK is for all small dinosaur lovers. Those who can easily best us adults when it comes to facts about the eating habits of Tyrranosaurus Rex, and who will tell you that a Velociraptor could run 50 kilometres per hour. But what is it about dinosaurs that fascinates some children so much? What makes them memorise an incredible amount of facts – and very long names? We had the help of an expert to understand better.

Lina Bodestad is a licensed psychologist specialising in children’s development. She believes it is the combination of reality and fantasy that makes these prehistoric beings so intriguing. “Dinosaurs have animal-like qualities that the child can relate to, but they also stimulate the imagination with their fairytale qualities. Like being able to fly like a dragon or having sharp monster teeth. When the lines between reality and fantasy become blurred, a child can feel a tingling sensation of curiosity and excitement.”

But it's not all about diving into an exciting and magical world. For children aged three to six, there is often a need to systematise their surroundings, like when they sort their toys by colour. “There is something thrilling for children of these ages about collecting facts and understanding how things are connected and can be compared and categorised. The world becomes a little more understandable", Lina explains.

Since details and facts are important for children, all the dinosaurs in JÄTTELIK are inspired by the real ones. Having this special knowledge gives them a first sense of truly mastering something – and it boosts their confidence. “While you as a parent maybe don't know much, the child can take pride in knowing more than you about the differences between carnivores and herbivores some 65 million years ago.”